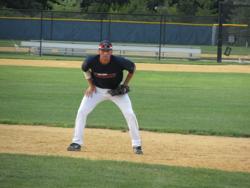 Cardinals 2 – Whalers 1
This game was a battle between the top teams in the North and the Atlantic divisions, and could be a preview into a possible playoff matchup. Brian Russel (Staten Island) pitched seven and 2/3 innings in tonight victory. Russel gave up just one earned run, issued only one walk, and struck out six. Robert Vani (Adelphi) and Thomas Midolo (Pace) each had one hit and one RBI. Andrew Nunez (Caldwell) had one stolen base and scored one run. Louis Matarazzo (Catawba Valley) scored one run.