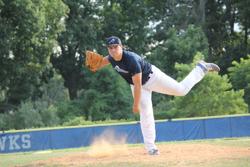 Atlantics 10 – Sand Sharks 2 (F/7)
Chris Hardardt (Hofstra) launched a three-run home run in the first inning that put the Atlantics up 4-0, as they coasted to a mercy-rule victory on Tuesday evening. Three other Atlantics had multi-hit games, including Vinny Orlando (Dowling), who also drove in a pair of runs. Thomas Burke (Concordia) needed to grind out four innings to pick up the victory, and he gave up only two runs on six hits and three walks. The win puts the Atlantics just three games behind the idle Whalers for the North Division championship.