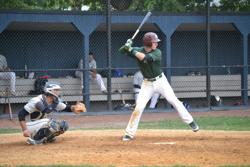 Hurricanes 11 - Makos 3
Offensive game was the name of the game today for the Hurricanes, who had a total of thirteen hits as a team. The outburst was led by slugger Mike Manganiello (Concordia) who was 3-for-5 with one extra base hit, two RBIs and a run scored. Other key contributors to the Hurricanes offensive include Tommy Ziegen (SUNY Old Westbury) who had a three hit game with two runs scored and a stolen base. Both Anthonys' McQuade (Mercy) and Galanoudis (Molloy) combined for three hits, one for extra bases, and two RBIs and two runs scored.