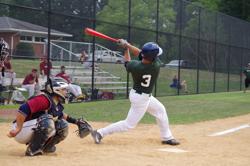 Red Birds 14 - Shamrocks 3 (F/5)
The Red Birds bats came out firing from the first inning, leading to four runs including a three-run blast by Joe Mendez. They kept the offensive pressure on until the end of the fifth inning, when they won by mercy rule by the score 14-3. Mike Cundari drove in three runs of his own on three hits, and Eddie Vincinanza and Dan Hopkins also drove in three apiece, with both getting two hits. Skylar Mercado added one more run on a home run to left center field. Starter Matt Seelinger went the whole way, allowing only two earned runs while fanning six. Two of the three Shamrocks runs came on solo home runs by Alex Massoto in his first two at-bats.