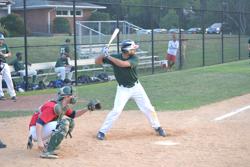 Shamrocks 9 - Federals 7
It was a strong day at the plate for Shamrocks cleanup hitter Matt DiBiase (NYIT), who was 2-for-5 with three RBIs, two runs scored and a stolen base. The team overall had a total of thirteen hits. Jake Otis (Dickinson) and Elan Trischitta (Purchase) combined for four hits, one for extra bases, two RBIs, and a run scored. Michael Auriemmo (NYIT) also went 2-for-2 with two RBIs. Despite the shaky starting pitching for the Shamrocks, Matt Leach (St. Joseph's) came in to shut the door providing four shutout innings of relief and striking out six.