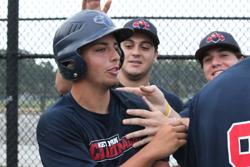 Cardinals 5 – Federals 4
Michael Stack’s (Adelphi) game-winning single in the bottom of the ninth inning capped off a Cardinals comeback victory from a 4-0 deficit. The Federals scored all their runs in the second inning, highlighted by a two RBI single by Craig Weber (Mount Saint Vincent). After many missed opportunities, the Cards got an RBI single by Louis Matarazzo (Catawba Valley) and a two-run hit from Robert Burns (Adelphi) before Andrew Nunez (Caldwell) tied the game in the seventh with an RBI single. Brian Russell (Staten Island) pitched three scoreless innings in relief and gave up just two hits to earn the victory.