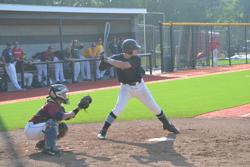 Nine innings was not enough for the North Atlantic Collegiate Baseball League to determine which All-Star team was the brightest. Unfortunately, our own star ran out of light before a winner could be determined. With a run in the top of the ninth, the North All-Star team was able to earn a 3-3 tie against the Atlantic All-Star team. Giovanni Dingcong (Stack) of the New York Atlantics won the game’s MVP award.

For six innings, the Atlantic All-Stars had dominated the North All-Stars with solid pitching and defense. Then Tom Midolo (Pace) entered the game, and the second NACBL All-Star game turned on a dime. The New York Cardinals catcher fouled off a pair of 0-2 pitches before he laced an RBI double to the right-center field wall, and his team was on the board and back in the game. 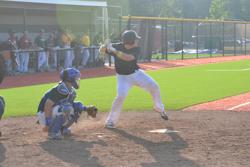 “I shortened up, looked to go to right field, got a good piece and drove it,” Midolo said after the game. Midolo would steal third on the following play, and score a batter later on a passed ball.

The ninth inning began with Alexander Masotto (Villanova) picking up his second hit of the game, and he promptly stole second base. Then, two wild pitches from freshman pitcher Alex Perry (Sacred Heart) allowed Masotto to get to third and then score the tying run. The North would get the go-ahead runner to second base when the Federals Connor Gordon (Davidson) walked and stole second, but Perry struck out the final two batters of the inning. After a 1-2-3 bottom of the ninth for the Atlantic All-Stars, the game was ruled a tie. 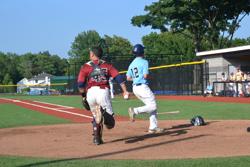 Whalers All-Star Greg Podell scores in the first on a Mark Flynn single.

“It was fine to end in a tie,” admitted Joe Lisio, coach of the North All-Stars and the Cardinals. “We were down 3-0, and we fought back and tied it, it’s OK.” Lisio’s team was as engaged with the game during the nail-biting conclusion as they were when it began. When the tying-run was scored, none of the players acted as if it was simply an exhibition game. Midolo shared his coach’s sentiments, saying that he was “pumped” when his team rallied in the ninth, but wish that they could have continued playing.

The North’s comeback took away some of the luster of Giovanni Dingcong’s (St. Thomas Aquinas) MVP performance. After Mark Flynn (Columbia) put the Atlantic team up 1-0 with an RBI single in the first, the freshman outfielder lined a two-run double in the second inning to give his team a 3-0 lead. Dingcong wasn’t done yet; he hit a triple in the fourth inning, but ended up being stranded at third base. 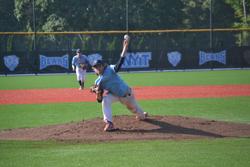 “I was really just trying to have fun with the boys,” said a soft-spoken Dingcong. His coach in tonight’s All-Star Game, Craig Everett of the Long Island Whalers, was impressed. “He played well. I’ve actually seen him play a lot. I watched him last summer. He’s going to have a good career at STAC.”

“When you’re pitching one inning at a clip, sometimes it’s hard to settle in,” explained Everett. That was not the case tonight. Perhaps Joe Lisio summed up the NACBL – and the entire sport – the best: right now it’s all about pitching.

Photos of both teams at this game are available here...