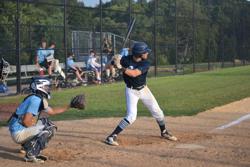 Atlantics 11 - Whalers 5
This exciting game was back and forth until the fifth, when the Atlantics offense exploded with a seven run inning. The drive was led by slugger Vinny DiMaria (Iona) who was 3-for-3 with one extra base hit, two RBIs and a run scored. Batting third, the shortstop Brandon Fischer (Briarcliffe) was 2-for-4 with two doubles, two RBIs and a run scored. Dominick Raucci (Dowling) went yard in this one with a solo shot in the second. Jesse Russo (Hofstra) went 3-for-4 with an RBI, a run scored and a stolen base. Robbie Hopes (Muhlenberg) also had two RBIs. The Atlantics starter Christian Huertas (SUNY New Paltz) went six strong innings allowing four earned runs on nine hits with two strikeouts and one walk earning him and his team a trip to the NACBL World Series.