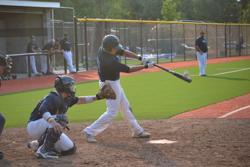 Atlantics 4 - Cardinals 2
The first game of the 2014 NACBL Championship series was a tight game through seven innings. Joey Enderle (LIU) gave a stellar pitching performance and kept the Cardinals at bay, throwing a complete game. Enderle allowed only one earned run on six hits with four strikeouts. Slugger Dominick Raucci (Dowling) had the decisive bat. On the day, he was 3-for-3 with a double, an RBI and a run scored. Outfielder Joey Fusco (Hofstra) also had a multi-hit game going 2-for-4 with a triple and two runs scored. Vinny DiMaria (Iona) continued his hot streak in the playoffs lacing an RBI double into left, helping to secure the Atlantics victory in the first game of the two-out-of-three NACBL World Series.