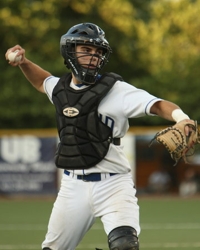 Calhoun Coach Joe Corea has seen a lot of great players in his 43 years of coaching high school baseball on Long Island. According to him, “Jake Thomas has the best swing I have ever seen and I think he is the best player in the best conference on Long Island.”

At 5’10”, 175 pounds, this left-handed hitting catcher possesses the all-important Five Tools: He can hit for power, hit for average, he has speed, a great arm and is great defensively. In 2010, Thomas was named Most Valuable Player of his Calhoun team and led them to the 2010 Nassau County AA Championship. The other coaches in Nassau County voted him as one of the four finalists for the prestigious 2010 Diamond Award as the best player in Nassau County. He was the only junior to be nominated.

Off the field, Jake is a member of the National Honor Society and Math National Honor Society and sports a perfect 4.0 grade point average. In his free time, he regularly volunteers for the Long Island March of Dimes. Jake has committed to play college ball at Binghamton University and was accepted into the School of Management, which is one of the most competitive business schools in the country. Each year, the school accepts over 30,000 applications for only 2,000 freshman seats. 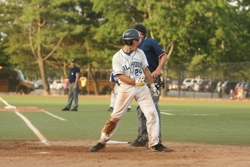 When it comes to balancing the academic demand of Binghamton’s School of Management with playing Division 1 baseball, Thomas has a great plan. “The academics come first,” Jake told BPM. “Baseball ends at some point so getting the grades I need is what’s important to me.”

“Jake will enter Binghamton as their top catching prospect. Jake is solid behind the plate and has a quick release with good arm strength,” Jake’s travel ball coach Shaun Manning said. “This is a great pickup for Coach Sinicki and the Bearcats.”

Thomas finished the 2010 season with a .493 batting average, seven home runs, 35 RBI. He also turned it up on the postseason. He hit .625 with one home run, six RBI and 10 runs scored in the playoffs. For his success on the field, the Nassau County coaches named him the 2010 Cody Award Recipient as Conference AA Playoff MVP, which goes out to the player who demonstrates great baseball ability, sportsmanship and team play.

“Jake is a tremendous young man and a fierce competitor on the baseball diamond,” Manning added. “He swings the bat exceptionally well and possesses great speed, which makes him a rare commodity as a catcher. Defensively, he is very versatile having played catcher, outfield and third base for the Storm.”