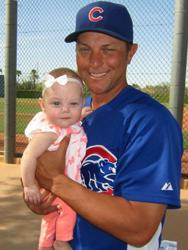 Even though he was wearing a Chicago Cubs uniform while standing on the freshly manicured grass at Citi Field, nobody in the building was more at home than Anthony Iapoce. The Astoria native and Monsignor McClancy Hall of Famer was in Flushing during the Mets recent home stand to monitor the progress of the Cubs’ young stars in his role as the special assistant to the general manager for player development. The opportunity to return to his stomping grounds in a Major League uniform had him reminiscing about his days as a starry-eyed sandlot ballplayer.

“It’s pretty awesome,” Iapoce said. “It brings you back to all of these memories of playing at Monsignor McClancy, playing stickball in the streets, or at the high school All-Star game at Shea Stadium… To think you were sitting in the stands, thinking [about] how you were going to get on the field, and now that you’re there, you just don’t take that for granted at all.”

Iapoce parlayed a two-sport standout career at McClancy into a baseball scholarship at Lamar University in Texas. He was drafted by the Milwaukee Brewers in the 33rd round of the 1994 draft and spent 11 seasons in the minor leagues, reaching the Triple-A level four different times. In 2012, the Cubs hired him in his current position after he spent time as a hitting instructor in the Florida (Miami) Marlins and Toronto Blue Jays organizations. Iapoce has used the knowledge he’s gained in his many stops to give back to the local community through camps and clinics he runs in the offseason.

“I’m fortunate enough to be in a position to travel and see all of our minor-league teams, come home, and get back with some old friends,” he said. “I try to provide some camps and clinics through the experiences that I’ve learned.”

When working with young ballplayers, he likes to keep his message simple. He encourages them to trust their innate abilities, especially when they’re struggling on the field.

“Two things you try to teach a guy is to trust himself and to make good decisions,” he said. “If he makes a bad decision, learn from that. It doesn’t matter what else he does, if he doesn’t have those two things, it doesn’t matter how many swings he takes, how many pitches he throws, or how many grounders he fields; if he doesn’t trust and believe in himself like he did in high school and college, he’s going to have a tough time.”

While the Cubs hired him to keep an eye on their tremendous young talent including Kris Bryant and Addison Russell, he has also managed to follow the progress of his alma mater. This year’s McClancy team went deep into the CHSAA baseball playoffs with a young squad. He credited the coaching staff for the tremendous job they’ve done with the program.

“That’s a tribute to the school and to Nick [Melito], who is coaching that team and getting those kids ready and prepared,” he said. “His passion runs through the players to get better every day and keep that tradition of McClancy baseball going.”

Now in his third year with the Cubs, Iapoce uses his passion for improvement to grow as a coach and learn from the vast experience within their organization. One of those who have influenced his methods is Cubs manager Joe Maddon.

“You just try to be a constant learner at everything you do or else you get stale,” he said. “I’m always afraid of being stale and saying the same thing. Being around Joe Maddon, listening to him talk and his experience, it’s been a great ride.”

With over a decade of beating the bushes in the hopes of getting to the show, Iapoce’s road has been filled with the bumps and bruises of long bus rides for little pay. Not one to be deterred by the challenges of ascending the coaching ranks without Major League service time, he took the fighting spirit he displayed at McClancy and carried that with him on his journey.

Watching Iapoce operate in uniform on the grounds at Citi Field, the sun was not the only thing shining bright on him. There was also the smile that comes with vindicating a dream that has its roots here in Queens.